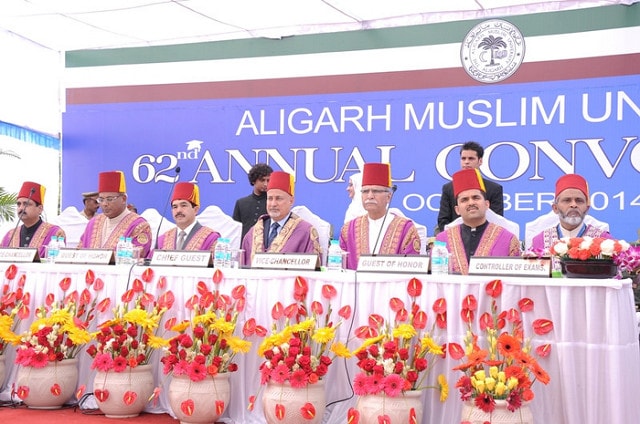 More than 4,000 degrees and around 240 gold medals were awarded at the 62nd annual convocation of the Aligarh Muslim University (AMU) here today.

Director General, Islamic Educational, Scientific and Cultural Organization (ISESCO), Rabat, Morocco and Secretary General of Federation of Universities of Islamic World (FUIW), Dr. Abdulaziz Othman Altwaijri, called upon Muslim youth in India and all over the world to come forward and project the "true, humanitarian and inclusive image of Islam" to the rest of the world, a release from the AMU said here.

Delivering the convocation address, Altwaijri, who is a noted educationist in the Middle East, said that in today's world, threatened by the divisive forces of "terrorism and senseless violence", it had become incumbent on Muslim youth to reaffirm the image of Islam as a "religion of peace and mercy".

"Islam teaches us to be thoughtful, considerate and open minded to humanity at large. It is imperative that we now present the true face of Islam before the world instead of a distorted one," he said, adding, a feeling of false superiority and self righteousness would never allow any society to progress in today's world.

Altwaijri said he was confident that the fresh graduates of the Aligarh Muslim University were embarking upon "a new journey to serve the Muslim community as well as all humanity for enlightenment and progress in all avenues".

He lauded the AMU for launching a Bridge Course for graduates of religious Madrasas (Quranic schools) for providing a link between Quranic schools and modern education. This step of the AMU, he said, would not only improve the skills of Madrasa students by opening the doors of modern education, but would also help them in playing a more meaningful role for the general benefit of the community. He said that this was a forward looking initiative in helping society in the "broadest sense of the word".

Earlier, reading out the University's annual report, AMU Vice Chancellor, Lt. Gen. Zameer Uddin Shah (Retd.) said that the Madrasa Bridge Course was a "unique initiative which will go a long way making Madrasa students stakeholders in nation building". He said that the AMU was fully aware not only of its responsibility in raising academic standards but also in fulfilling its social responsibilities to the country as a whole. Gen. Shah said that the AMU reiterates its commitment to nation building and the ideals of its founder, Sir Syed Ahmad Khan. He said that our minority character is very dear to us and that is why we are critically examining the government proposal for a common act and common entrance test for all central universities.

The Vice Chancellor said that AMU is ranked 80th in Asia by Times Higher Education University Rankings 2014 and third among Indian Universities.

He further pointed out that among the BRICS nations (Brazil, Russia, India, China and South Africa), AMU is ranked 50th and according to the Neilson Annual College Survey, the J N Medical College was ranked 15th out of the 300 medical colleges which were surveyed. He also reminded that the AMU's Law Faculty which was ranked 11th in 2007 is now ranked 6th among the law colleges in India.

While talking about boosting research facilities, the Vice Chancellor stated that an Innovation Council has been established which will award two 'outstanding researchers of an academic year' with a prize of Rs one Lakh. He further stated that during the 'Sir Syed Innovation Festival' at least two prizes for a University student and a University School student of Rs 50, 000 and Rs 25, 000 respectively will be handed over for best innovations by students.

The Vice Chancellor also laid emphasis on vocational training by stating that the Community College's Nodal Office has been established with a UGC grant of Rs 185 lakh to start a Bachelors course in vocational courses under National Vocational Education Qualification Framework (NVEQF).

Talking about the social responsibility, the Vice Chancellor said that AMU dispatched a relief team of doctors and paramedical staff soon after the state of Jammu and Kashmir was hit with a devastating flood. General Shah also said that the University students even decided to forego Sir Syed Day Dinner to send relief to the flood victims. The University employees have donated on day's salary for J&K flood victims, confirmed the Vice Chancellor.

He said that every department now has a placement cell, around 50 reputed companies and organizations including the leading business houses such as TATA consultancy, ICICI Bank, Wipro, Eureka Forbes, Vasan Hospitals, NIIT, etc recruited our students, he said.

While accepting the Honoris Causa, Dr Shamsheer Vayalil Parambath, Managing Director, VPS Health Care, Abu Dhabi, UAE said that visiting the Aligarh Muslim University has always been like a pilgrimage for him. He added that he has vowed to devote himself for the benefit of the society and everything that he owned belongs to all fellows who have been deprived of health care life. He also said that he dedicates this great honor conferred on him today by the Aligarh Muslim University to every citizen of this global village, who has dedicated his life to the society. Dr Shamsheer was awarded a D Litt and DSE (Honors) degree.

In the acceptance of Honoris Causa, Mr Nadeem A Tarin, General Manager, Salman Al-Terais and Partners Limited, Riyadh, KSA, said that he feels that the thoughts of Sir Syed 140 years ago are more relevant today than they were before and a considerable amount of effort is required to be made by all of us to make this institution more beneficial, reliable and strong for the community and the nation.

He also said that the University is also approaching its 100th anniversary in the year 2020. Due to the establishments and achievements of this great institution, we are fortunate enough to benefit the fruits of modern education that gives us immense help in our personal and professional lives. Mr Tarin added: By 2020, let us all set a target, Aligs or non-Aligs as a collective effort to bring this university to new heights, whether it is in faculty improvements or cultural advancements, safe guarding AMU's traditions or infrastructural development.

Meanwhile, Brigadier S Ahmad Ali, Pro Vice Chancellor, Aligarh Muslim University read out the citations of the Chief Guest and Guest of Honors and highlighted their contributions, while the Controller of Examinations, Professor Javaid Akhter announced the names of the gold medalist and other degree recipients. The degrees were received concerned faculty deans. The AMU Registrar, Dr Asfar Ali khan conducted the program, a release by Dr Rahat Abrar, AMU PRO said.