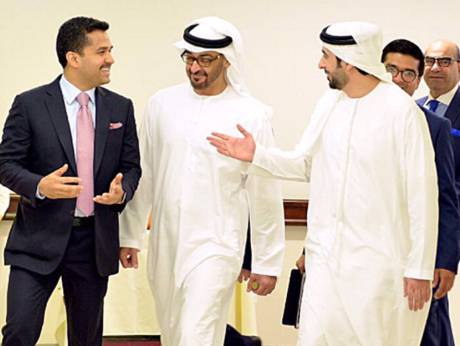 Shaikh Mohammad visited various departments and facilities at the Burjeel Hospital and interacted with patients and inquired about their well-being. He expressed his support for the private sector and his desire to enable the private health care sector to play a larger role in transforming Abu Dhabi's and the UAE's health care ecosystem.

Shaikh Mohammad was briefed on the upcoming projects of the hospital, which was opened in 2012, as well as on development programmes that will strengthen the infrastructure of the health care sector in the emirate and improve the quality of health services provided for patients to further enhance the leadership of the health sector in Abu Dhabi.

He underlined the importance of continued development of the health sector as one of the vital and key sectors in addition to the important role of investment in this vital area to inspire and support medical personnel in the public and private sectors.

Shaikh Mohammad issued instructions to launch a series of initiatives that boost the emirate's health sector. He ordered the setting up of a medical college to provide the medical sector with highly qualified medical cadres.

Shaikh Mohammad instructed the competent health authorities to consider the setting up of a specialised medical city that supports Abu Dhabi's regional role in health care services and medical tourism, and the development of an investment fund to boost medical projects in Abu Dhabi

Burjeel Medical City, which will open in 2018 will focus on ultra-specialised domains like oncology.